Some people
must have keep their fingers crossed indeed yesterday, because we caught a
nightjar at 11.15pm! Trine and Jon Peter even saw another one flying over the island
while extracting! So they are around!

These amazing birds are among my favorite in the hand. This one was a male, according to the
white spots it has on the tail and wings. 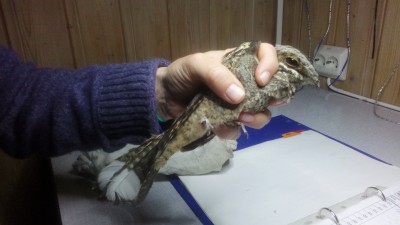 Even though the all team came to have a good look at it, the nets were open at 3am this
morning and we got 37 birds ringed through the day, which makes it a better day than the rest
of the week. There were 14 willow warblers, 2 chiffchaffs, 2 icterine warblers, 1 lesser whitethroat,
1 robin, 2 spotted flycatchers, 4 pied flycatchers and 1 tree pipit caught and ringed today. A few
of the young greenfinches ringed the previous days are also fooling around and getting retrapped
regularly as well as our traditional trush nightingales.

After all that, the dream team had to go in the early afternoon and I can’t thank them enough
for their enthusiasm, their generosity and all the good moments we had.

The island seemed empty after a week with 6 people, but fortunately, Stig, Anders and Tommy
arrived in the evening.